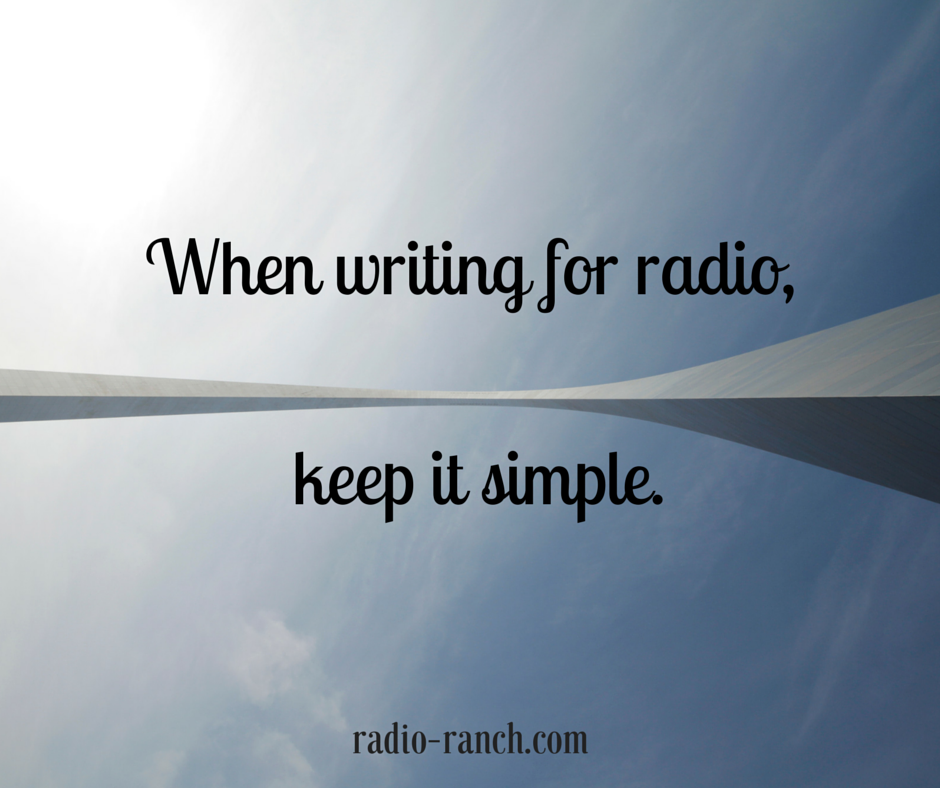 First and foremost, when you’re writing a :30 or :60 radio spot, you don’t have time for a lot of complications. If you have to spend half your precious time in the set up, you’re toast. Keeping it simple is the obvious solution. Not always the easiest of paths?

Here’s where to start: If you have done your brainstorming and found that emotional connection between product and consumer, find one single, simple, silly premise that hits the mark. Anything in your story that doesn’t emanate from there gets the old heave-ho.

Be ruthless. Save that brilliant but unnecessary zinger for another day. You’ve got some Simple to achieve.

We were in the studio recently when Lisa dropped a script on us that was so wonderful, such a divine slice of comedy perfection, that it just left us breathless, mainly because we were laughing so hard. And what made this piece so wonderful, so classic, so gall-danged funny, was its absolute simplicity.

The gist of the spot was this: A guy tells an office mate that he bought a car on his lunch hour. The mate starts laughing in disbelief. Tells a fellow worker what he’s laughing at. She starts laughing, too. Our hero guy keeps adding details about his purchase and his great treatment at the dealership, and the office workers just keep laughing harder.

Milk-through-your-nose-thank-you-George-Carlin hard. Simple beyond belief. Hilarious to the max. The client loved it.

Here’s how it breaks down:

I am reminded of an actor I worked with back in The Groundlings, a man named John Paragon. Most of you remember John as Jambi the Genie on Pee Wee’s Playhouse. I remember him for his incredibly simple but devastatingly funny pieces he would put up on stage.

John is a consummate physical actor, a brilliant clown. His offerings were more performance art piece than comedy sketch, really. Like something out of a French cabaret in the 20’s. And the premises were always clean and clear and … well, simple. I remember one in particular which featured John and an enormous canvas bag. A long bag – John is just under 6 foot – with a drawstring at the top. With cheesy magic-act music playing, a pretty girl assistant in a spangly leotard helped John into the bag, pulled it up, and pulled the drawstring tight.

The rest of the scene consisted of John trying to get out of the bag. Period.

Every night it was different. Every night he struggled. An enormous human larva writhing across the stage. And we laughed. Lordy, how we laughed. The kind of laughter that leaves your ribs aching and you in serious concern for the state of your bladder. Why was it so funny? Why did we roar with appreciation when he finally burst out of that bag? All I know for sure is it was simplicity personified.

I am in awe of those who can take a story, reduce it to its most basic elements, and put it together in the most straightforward way. I learn something new from something simple every day, and try to make it a part of my writing.

So, if your spot isn’t working, chances are you’re working too hard. Your script is cluttered with a complicated concept, and side trips for jokes, and difficult to understand twists and turns. Think simple. Funny will follow.