How do I Write a Radio Spot? 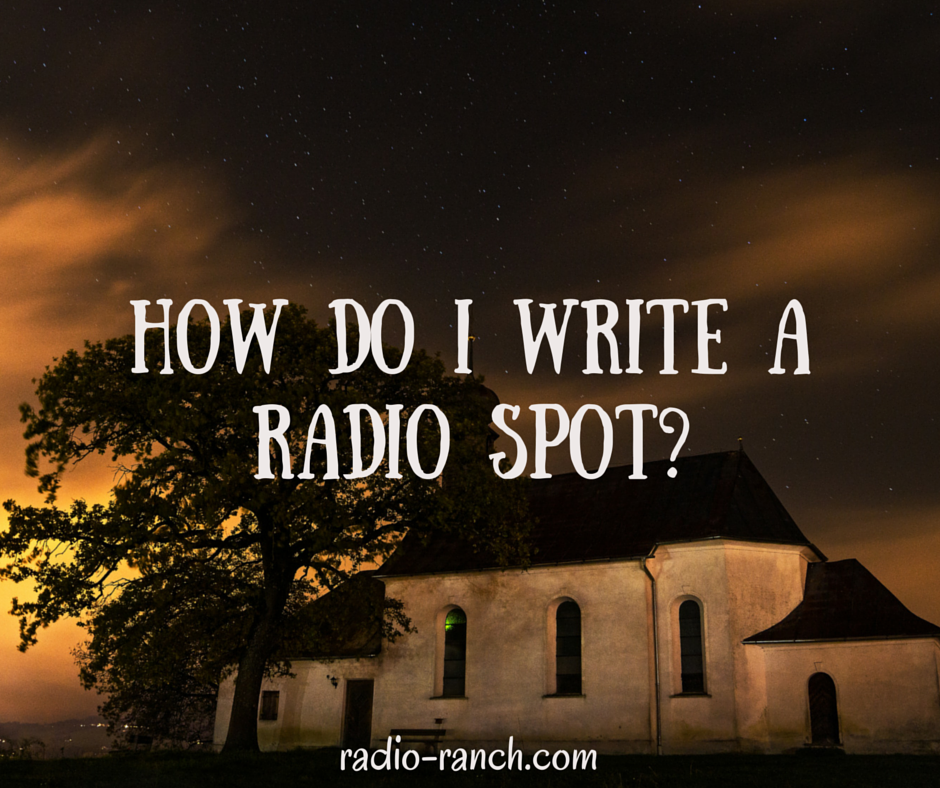 Well, sometimes it starts with a rock-climbing nun…

Always Write What You Know.

If you are a writer, or trying to be one, guaranteed you will get that advice at one time in your life. Multiple times. Until you can almost predict when someone is about to say it. Enough already. And so, when people ask me about writing radio spots, I say, Take what you know – and run with it.

I know the objections. What do I know about lawn tractors or baby shampoo? As a consumer, probably some. As a landscaper or chemist, probably less. But as a human, you have untold resources and stories to tap into. That’s the stuff you know. Your starting point.

You want to know more? Be a sponge. Soak up and remember everything you have ever done or seen and most of what has ever been said to you. That’s the cool stuff writers write when they write from what they know. The details. Collect them from all around and keep ’em safe. You never ever know what will come in handy. Start with that. Then go.

The process we have always used here at the Ranch involves a key step – brainstorming. After we have gathered from the client everything we possibly think we need to know about him and his product, and as a team answered some questions for ourselves, mostly to establish the emotional connection between said product and the intended buyer, after all that, the fun part starts. We start to tell stories, from our lives, from others, stuff we’ve read, characters we’ve encountered. We bring what we know to what we know we have to achieve. Lots of sentences that start with “what if” and end with an anecdote pulled from our own lives – names changed to save our family from embarrassment, of course. Mostly.

My mother had a cousin whose name was irresistibly perfect for comedy, so I used it a lot. It cannot be said often enough. Successful advertising tells a story. And the stories come from us.

Back in school in Houston I took a geology course one summer semester. Loved it. Loved it so much I was seriously considering taking more. Part of the lab section included a field trip.

Yay, college kids on the road.

It wasn’t a parochial college, far from it. But there was a nun enrolled in our class. She was part of an order that required she never leave the convent alone, so there was always a fellow sister with her. I guess I sort of assumed that she would not make the field trip, so I was pleasantly surprised when she showed up for the bus. She and her buddy.

Our ultimate destination was the oh-so-aptly named Enchanted Rock. Located between Fredericksburg and Llano, Texas, Enchanted Rock is technically a pink granite pluton batholith. A gigantic outcropping rising 425 feet above the surrounding terrain to elevation of 1,825 feet, it is the largest pink granite monadnock in the US. (Yes, I had to look that up. Geo 101 was a long time ago.) A mecca for budding geologists, and a lovely climb on a cloudless summer day in the Lone Star State.

We pulled into the parking lot of the Enchanted Rock Reserve. Our peppy 50-something professor who was one of the reasons I loved the class so much herded our cranky hippy asses onto the trail and toward the summit. I kind of lost track of the sisters, who were following at a small distance behind.

The climb was pretty arduous, for everyone except the professor, but when we got to the top, it was so worth it. The kind of view they invented the word “breathtaking” for.

The rest of the class followed our leader to the far edge to observe some geological phenomenon or other. I hung back, and turned to look behind me. All I saw was this expanse of gorgeous pink rock against that big blue Texas sky. All by itself, pretty awe-inspiring. Then, rising up over that horizon, came the two nuns. They were in full sister regalia. No hiking clothes for them. We’re talking straight out of Sound of Music. Dark dove-colored habits with spotless white collars and wimples and veils. Whipping around them in the strong high altitude winds. They walked slowly, in almost syncopated step. Serenely, stately, absolutely no evidence of the physical effort they had just completed. I watched those two nuns, against that rock and the blue heavens, come towards me, and I knew that image, funny and moving and straight out of an Ingmar Bergman flick, was gonna stick.

Fast forward many years. I am brainstorming with The Ranch for some spots for a photo developing service. Back when people actually needed photos developed. We were pushing the fact that you automatically got a second print for free. We started throwing around places and events where you take pictures. At family gatherings. At picnics. At old-fashioned, family oriented parish picnics.

Suddenly, I remembered those nuns climbing in their habits. And they became the sisters (and brothers) of an order, dressed for Mass and frolicking at a picnic. Tearing it up with the sack races, three legged races, the wheel-barrow relay. Sliding home in the softball tournament. And later, trying to wrestle with the moral dilemma of whose relative gets that second print. All with nary a wimple askew. The point is, I didn’t know squat about nuns. Certainly not nuns playing softball.

What I did know was that amazing experience all those years ago on a granite dome. So I took that and I went from there. The spot was silly and fun and won a bunch during that award season. It’s called Double Talk and you can find it on the Ranch site. You can also find a template for our client information form. It’s a handy tool, especially if you are having a brainstorming session of one. You will always be surprised by what you know.

And you don’t have to write it – you just have to let it take you someplace new.