Leave the Advertising to the Pros 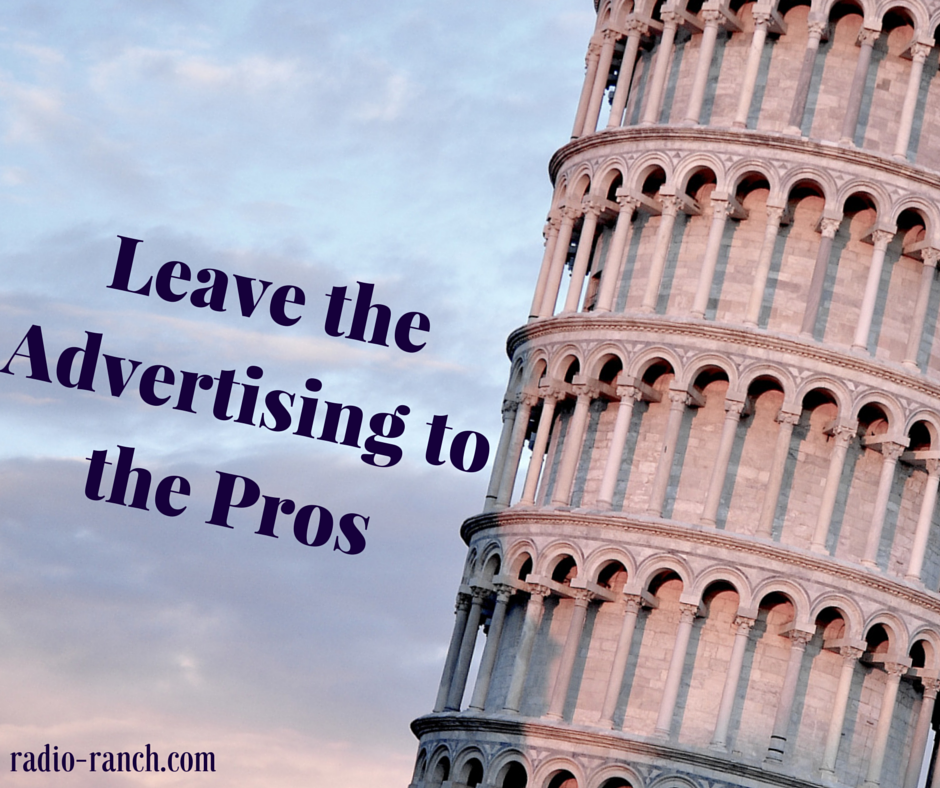 The conversation goes something like this:
Your client: “Oh, I’m always in my own commercials.”
You: “Uh, no.”

As radio writers/producers, we must disavow our clients – particularly the small, retail guys we love and who can be our bread and butter – we must make them turn loose of the notion that they need to be in their own radio commercials. And it’s not just because we think we can do the job better with actors and professional writers – we can.

It’s because real people on the radio are, hmmm – what’s the word I’m looking for? Oh, yeah. Boring.

Oh, Becky, what about this whole reality thing, real people are funny, keep the situations real, we don’t want no announcers who sound like announcers credo that has been that backbone of radio for some time now? The answer is simple. We create a different reality, a heightened, intense, interesting, dramatic, amusing, entertaining reality.

I always tell actors in those beginning classes to find that “real” you that you want to put in front of the microphone. The compelling, inviting, involving real guy that people want to listen to. Not necessarily what we would ordinarily think of as the real you.

If you need proof, listen no further than those strange boilerplate ads that have become popular over the years featuring audience members being interviewed as they come out of a movie preview. Have they ever made you want to rush to the theater?

Your friend telling you over lunch how amazing the movie was, THAT makes you want to go. So you find the actor who can sound just like your best buddy, but better, write him a tight little script, and let him tell the story.

For some reason, car dealers are among the biggest transgressors of DIY radio. They have a long tradition of appearing in their own television ads and trying to convert those into radio. Which may be a large part of the issue. That bigger-than-life personality that jumps up and down on the hood of the car, when the visual is removed, just becomes a guy yelling at you. That crazy sidekick chimp becomes merely a prop, known in radio as dead air. They also like to feature their daughter/girlfriend/nephew/gramma standing beside the car. Not gonna translate into radio. You see the problem.

Here’s what you can do. Tell your client to let you take the spirit of that big TV identity and shape it into a radio campaign. There is a certain mattress store owner here in town who has done just that to great success. Or you can do something that combines a little comedy and a tag from himself, the real guy. Tell him to shake it up, try something new.

You have to have that conversation with your client. You know, the one where you say, Would you let the rookie head up your sales department? Of course not. Leave it to the media pros. And if you really want to give your relatives a job, don’t let it be in front of a mic.

What it boils down to is this: We let you do what you do, establish a personality for your business. Let us do what we do. Make it into radio.

Make it into radio. That, really, is the key. You know the old saw: It ain’t brain surgery. Because we would never dream of operating on ourselves. What we are is radio people. So you fix our brains/sell us our cars/clean out our drains/groom our poodles/straighten our smiles. Let us do your radio. Trust us. We got this.